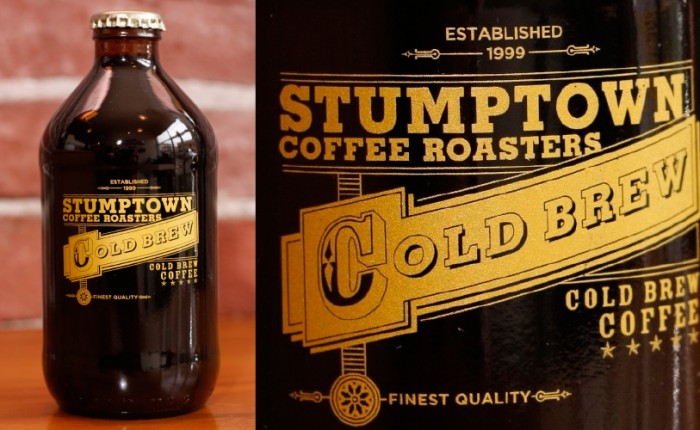 Stumptown Coffee Roasters arrived on the Portland coffee scene in 1999 and have been brewing their own premium coffees with a cult-like following ever since. They recently launched a Cold Brew bottle only available in Portland cafés, making the rest of the nation’s coffee drinkers jealous. At a glance one might think that the town is full of 7 am beer drinkers, but it’s just another example of Portland’s uniqueness and love for coffee.

The tinted bottle and metallic gold print, designed by Jessie Whipple Vickery of Kunstkraft, reflects the craftsmanship and attention to detail that goes into their coffee. In Jessie’s own words, the bottle is “inspired by early 20th century typography, the design for the new Stumptown Coffee Cold Brew Bottle brings a touch of sophistication to the refrigerated drink section.”

But enough about the bottle, let’s get to the good stuff. Instead of simply cooling and packing typical drip coffee, Stumptown uses the cold-water extracting process to maintain flavor over a shelf life of up to 11 days. Going that extra mile makes this brew slightly more expensive at $3.50 a bottle, but that’s comparable to the half-assed sugary, caffeinated beverages that Starbucks offers. It’s currently only available in Portland, however it’s possible they will eventually arrive at their NYC location (29th and Broadway for all you NYC’ers) and expand from there – maybe Seattle? Obviously made in America.