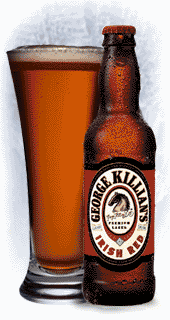 It’s St. Patrick’s Day.  Extremely un-American, yet we’ve embraced it like a holiday of our own.  We obviously can’t feature a Guinness, but George Killian’s Irish Red at least has the word Irish in it… and it’s originally from Ireland.  You must be 21 to enter the website, for two reasons, it’s the legal drinking age and the site is sure to scare children.  It’s a traditional lager based on the Killian family’s recipe created for the George Killian’s brewery in Enniscorthy, Ireland in 1864. Coors Brewing Company acquired the rights to brew and market the product in America and was introduced to the United States in 1981. You can find it at retailers nationally, packaged in bottles, cans and kegs. A 12-ounce serving of George Killian’s has 163 calories and 4.9 percent alcohol by volume.   You might as well have a few Killian’s this St. Patrick’s day to wash down the miserable taste of that corned beef and cabbage.  Drink responsibly.